Going back in time, 3.500 years, allow your senses to indulge into sensations of the greatness of the Minoan/ Cretan Culture.

With respect and sincere admiration to the Minoan Civilisation that was born here in Crete, we boldly went to depths so as to produce a performance of high artistic approach in an effort to portray the worship of Goddess Mother Nature, the centre of which is the enormous olive tree in our Minoan Theatre and is over 2.000 years old.

The primary experience medium of the performance is dancing. The Minoans loved recreational and religious dancing.

The performance begins with the entrance of men who come from all corners of the island of Crete to take part in the Festival Of Spring. In comes the Priestess who pays respect and prays to the majestic olive tree to start the ceremony.

The ritual continues with the Priestesses performing a dance act that finishes with offerings to the Great Mother Nature symbolizing the circle of life returning produce to the Earth.

We move on with Ariadne’s dance. According to the Myth, Ariadne, daughter of King Minos, unravels a thread to help Theseus escape from the labyrinth of Knossos. In this myth, we recognise a love story that links Minoan Crete to the rest of the Hellenic world.

The entrance of the men follows, performing Minoan sports with an emphasis on the famous bull – leaping. This sport is of religious nature in which the participation of the Aurochs Bull (a sacred animal in ancient Crete symbolizing virility and fertility) pinpoints the courage of the Minoans and their acrobatic potential. We have to underline the bloodless nature of this sport – the bull is not sacrificed at this stage.

The performance is concluded with the appearance of a young Virgin Maiden which brings to mind the abduction of Europa from Zeus. A young man wearing the mask of a bull embarks on a ritual dance which ends with the elevation of the feminine element underlying the matrilinear culture of Minoan Crete. Men and women in an ecstatic state call upon the deity for prosperity. We boldly  embarked on the creation of the Minoan Performance approaching every step of the way influenced by archaeological evidence, along with admiration and respect for the greatness and timelessness that  The Minoan Civilizations entails.

Our guests will be able to feel with all their senses the past and modern Cretan civilization. The Minoan Culture will be uncovered before the spectators eyes through the premises, aromas, music, colours, flavors, dance and the Minoan Cuisine.

In our Minoan Kitchen we use unique Minoan style clay pots and real wood fire. As the kitchen is open-air, all the guests can witness traditional way of Minoan cooking.

Our musicians play musical instruments dated thousand of years back such as Diaulos (ancient Greek wind instrument), the Lyre of Orpheus, Varvitus (a string instrument used to accompany feasts and symposiums as well as Dionysian festivities in ancient times), and ancient percussion instruments.

Come and join us to  experience even for a moment the world of first European civilization!

Minoan theatrical performance, the interactive activity with ‘kerasma’ before the show. The show starts at 15:00 and its duration is 45 minutes so it can be easily adjusted to pre-existing itineraries (e.g. a visit to Knossos or Heraklion Archeological Museum). 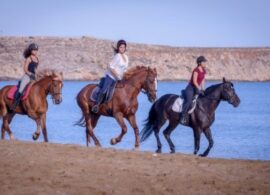 Riding in Crete The Riding Academy of Crete (Ippikos Horse... 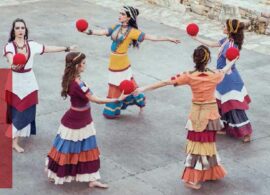 THEATRICAL PERFORMANCE OF THE MINOAN DANCE PRODUCTION Going back in... 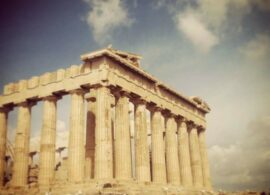